Krapp’s last tape and Embers, the short plays, from the oeuvre of theatre of absurd, are redolent of essential Beckett. The manifestation appears, not only from the anxiety or despair with which the works seem to start but also the bleak humour and a willingness to move on, even in the wake of awareness of nothingness. While it is interesting to note that, in his writing, where there is hardly any action, what catches attention, are the ways he employs to demonstrate despair. And if one is aware of his other works, one can easily recognize the similarities, which, in their distinct surroundings, give the outline of his ideas.

Krapp remains a moment motionless, heaves a great sigh, looks at his watch, fumbles in his pockets, takes out an envelope, puts it back, fumbles, takes out a small bunch of keys, raises it to his eyes, chooses a key, gets up and moves to front of table.

The fumble here instantly brings to mind the stone scene from Molloy, where Molloy seems to keep changing the position of pieces of stones in his pockets, the constant moving in Unnameable or the constant wait in Waiting for Godot. It represents the despair which the characters appear to be having, which comes from the struggle to keep on moving.

The play starts with a late evening in the future.

We witness, Krapp, an old man, sitting at a table with a tape recorder and a number of boxes containing reels of recorded tapes. Since it is perceived to be an evening in future, we are to understand that the scene is visualized, perhaps by a younger Krapp. There is a strong white light at the table and in immediate adjacent area, while the rest of stage is dark. The reference here may be to white and black/ light and dark or may be to life and nothingness. The antipodes. So, while the white light focuses on life/consciousness of self, the darkness may focus on the nothingness, both albeit existing together. The darkness may also relate to oblivion towards the rest of the world while Krapp’s focus is on the inner self *. This focus on the inner self being at the core of Beckett’s writing.

The theme of white and black is recurring throughout, white dog, black ball, dark young beauty…..

So, Krapp, now 69 years of age, on his birthday is listening to a younger Krapp, 39 years old, who in turn is listening to his younger self 28-29 years old. We witness the co-existence of all the three Krapps. Past, present and perhaps, the future, co-existing. Could it refer to endless time? Eternity? A witness of all the lives? Or could it symbolize the concept of memory? But why is he listening to younger self? Why is he recording a tape every year? 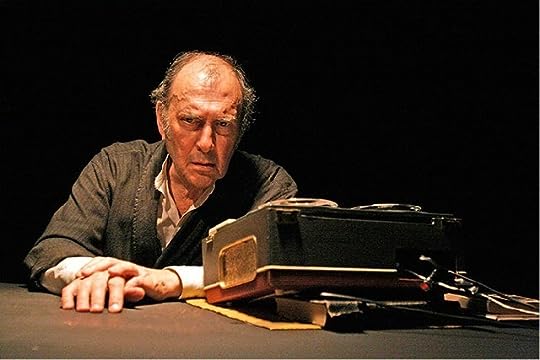 Spiritually a year of profound gloom and indulgence until that memorable night in March at the end of the jetty, in the howling wind, never to be forgotten, when suddenly I saw the whole thing. The vision, at last. This fancy is what I have chiefly to record this evening, against the day when my work will be done and perhaps no place left in my memory, warm or cold, for the miracle that . . . (hesitates) . . . for the fire that set it alight. What I suddenly saw then was this, that the belief I had been going on all my life, namely--(Krapp switches off impatiently, winds tape forward, switches on again)--great granite rocks the foam flying up in the light of the lighthouse and the wind-gauge spinning like a propeller, clear to me at last that the dark I have always struggled to keep under is in reality--(Krapp curses, switches off, winds tape forward, switches on again)--unshatterable association until my dissolution of storm and night with the light of the understanding and the fire-------

He needs to do so until the darkness terminates with the light of understanding and fire; the darkness of struggle, despair coming to an end with the realization of awareness of self as well as its acceptance.

Beckett speaks of the vision here, the fire. I wonder if he is referring to the concept of enlightenment or this again*. I also tend to think if here he refers to the state of Sanyaasi from the four age based ashramas from Hindu system where Sanyaas refers to the stage of renouncement of worldly and materialistic affairs by practicing detachment and self-realization( We know that Krapp is an old man and living alone in his den) **Symbolically, a sannyasi casts his physical body into fire by wearing saffron robes when entering this phase, signifying purification of body through fire thus freeing the soul while the body is still alive.

Towards the end we hear Krapp says,

Could it mean that he renounced all the worldly pursuits including happiness in order to attain self realization?

We are to understand from these words that this is the last tape that he has recorded, for he has finally arrived at the understanding. These last lines also represent a strong will to live on, even after the realization of the inevitable and dissolution of struggle with the acceptance. So while some people may feel that his writings are depressing or that he is celebrating the despair, I believe that his writings also stand for the honest admission which is fearless. He doesn’t shy from that which is certain and he writes about it because this is the only way he sees light. Also towards the end of his works, he exhibits a resolve for the life, something which also is at the heart of his writings.

This play by BBC is in 5 parts on You Tube.

*After World War II, Beckett turned definitively to the French language as a vehicle. It was this, together with the revelation experienced in his mothers room in Dublin—in which he realized that his art must be subjective and drawn wholly from his own inner world—that would result in the works for which Beckett is best remembered today( Wikipedia)

PS. This review doesnt include one on Embers. I may attempt to do that in future.
File Name: krapps last tape beckett on film.zip
Size: 62257 Kb
Published 20.06.2019

With a cast of one man, it was written for Northern Irish actor Patrick Magee and first titled "Magee monologue ". It ran for 38 performances. In a letter to a London bookseller Jake Schwartz on 15 March , Beckett wrote that he had "'four states, in typescript, with copious notes and dirty corrections, of a short stage monologue I have just written in English for Pat Magee. This was composed on the machine from a tangle of old notes, so I have not the MS to offer you. The available printed texts must not be taken as definitive. In a letter to Rosset's editorial assistant, Judith Schmidt, on 11 May , Beckett referred to the staging of Krapp's Last Tape as its 'creation'," and he made numerous significant changes to the text over the years as he was involved in directing the play.

Krapp performances that stick in the mind | Letters

Sign in. Breakout star Erin Moriarty of " The Boys " explains how her newfound popularity is fueling Season 2 of the hit series. Watch now. For his French-class assignment, a high school student weaves his family history in a news story involving terrorism, and goes on to invite an Internet audience in on the resulting controversy. A young woman leaves Ireland to find her boyfriend in England, and while there is helped by a man hiding unsettling secrets. A photographer and his wife take photographs of Armenian churches for use in a calendar.

Krapp sits at a cluttered desk and listens to tape recordings he made decades earlier when he was in the prime of life, leaving only occasionally to imbibe liquor offstage. To Krapp, the voice in the recorded diary is that of a naive and foolish stranger. Krapp's Last Tape. Info Print Cite. Submit Feedback.

Fay spain cause of death

King midas and his gold

The great theologians a brief guide

We need to talk about kevin autism