The Revolt of the Angels by Anatole France

Raining Angels in Paris and Washington

Can there be such a genre, biblical material excepted, as the anticipatory allegory? If so, Revolt of the Angels could well be a prime example.

In this weeks NYRB (Nov. 6 2017), Charles Simic has a piece commemorating Trumps election. In it he puts Trump in a literary context:

The only character I can think of in the world literature who resembles Donald Trump is Père Ubu in the play Ubu Roi (“Ubu the King”) by Alfred Jarry that famously opened and closed in Paris on December 10, 1896, after starting a riot. A parody of Shakespeare’s Macbeth... Ubu is a buffoonish pretender to the throne of Poland, a brutal and greedy megalomaniac who, after killing off the royal family, starts murdering his own population in order to rob them of their money. 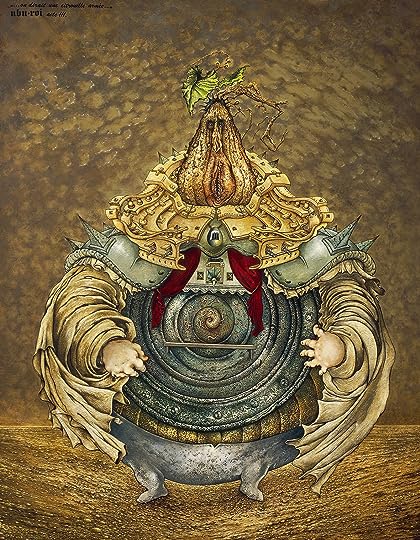 I think Simic is exactly right to place Trump historically in the French Third Republic, and not just because of his Ubu-esque personality. In fin de siecle France Politics are polarised. Religious belief is a defining issue. Racism is on the rise. Freedom, defined to suit, is the rallying cry of both Right and Left. Terrorism is on everyone’s mind. Fake news is the only kind there is. The foundations of the democratic state seem less than they have been in decades. The Revolution has been betrayed and the Nation belittled.

Revolt of the Angels is a parody of this tumultuous period. But, frightenly I find, it is also a very precise allegory of todays USA - written a century before events. The characters and plot seem out of the Trumpian playbook

The Angels in question, mostly guardian and therefore the alter-egos of the individuals they protect, have decided to mount a Miltonian rerun of the abortive insurrection by Lucifer. The Manichaean demiurge against whom they fight is Ialdabaoth (Obama). Heaven is the realm of the Democrats, who have had their unjustifiable way for far too long; earth is the territory of the Republican angelic guardians of freedom and independence from external rule.

The ringleaders are Arcade and Istar (respectively Steve Bannon and Vladimir Putin) who plan to destroy the existing order - one merely the republican earthly order, but the other the heavenly democratic order as well, that is, the entire governmental system. These two arrange for the election of the angel Nectaire (Trump himself) as President and Contradictor despite his lack of previous military, governmental or even political experience.

Many other supporting characters are identifiable: the female angel Zita (the inimitable Sarah Palin who has already been abed with some of the other guardian angels), the financing angel Sophar (Robert Mercer, Breitbart investor and Trump supporter), the Archangel Michael (Robert Mueller, defender of heavenly interests), the unnamed earth-bound angel still loyal to God (Jeff Flake, of course attacked mercilessly by the rest), Monsieur Sariette (Trumps personal lawyer, Michael Cohen, who knows where all the bodies are buried; but this could also be Attorney General, Jeff Sessions, who fits the description of a wizened gnome more exactly), not forgetting the religious support of the Abbé Patouille (a French facsimile of Jerry Falwell).

The plan is simple:Our project, Istar said, is a vast one. It embraces both Heaven and Earth. It is settled in every detail. We shall first bring about a social revolution ... this is facilitated by the lack of discernment among the mass of the human population, ...in a country where the climate is soft and existence made easy? Even here, where necessity calls for intellectual activity, nothing is rarer than a person who thinks.

Consequently the situation is ripe,

Beneath an apparently unchangeable exterior all is rotten within. A mere push would suffice to overturn an edifice which has not been touched for millions of centuries. Out-worn administration, out-worn army, out-worn finance, the whole thing is more worm-eaten than either the Russian or Persian autocracy.

One might surmise that the execution of such a project demands some level of familiarity with military tactics. But one would be wrong because

The multiplication of technical means, by infinitely multiplying the opportunities for mistake, paralyses the genius of those in command. At a certain stage in the progress of military science, a stage which our models ...are about to reach, the cleverest leader and the most ignorant become equalized by reason of their incapacity....Great numbers, in war as elsewhere, annihilate intelligence and individual superiority in favour of a sort of exceedingly rudimentary collective soul.

In short, Trump and Kim Jung Un seem well-matched. After all, as everyone knows deep down, a war is a matter of business.

Unlike the first time round, the rebellious angels do succeed in the divine overthrow. Satan becomes God. But (who could have thought anything else) nothing substantive changes in either heaven or earth. Those in charge have those not in charge to worry about, thus the perpetual cycle of cosmic as well as national politics.

Now, of course, all this could be merely a product of my inflamed imagination. Trump may well have succeeded in mortally infecting my own discernment through his continual, pervasive rhetoric. But there is also the possibility that the entirety of the political events in America is following a perennial script, one not necessarily invented but certainly articulated by Anatole France. Just sayin.
File Name: this is how revolts start.zip
Size: 55285 Kb
Published 16.04.2019

The Peasants' Revolt started in Essex on 30 May , when a tax collector tried, for the third time in four years, to levy a poll tax. Richard II's war against France was going badly, the government's reputation was damaged, and the tax was 'the last straw'. The peasants were not just protesting against the government. Since the Black Death , poor people had become increasingly angry that they were still serfs, usually farming the land and serving their king. Whipped up by the preaching of radical priest John Ball, they were demanding that all men should be free and equal; for less harsh laws; and a fairer distribution of wealth. Soon both Essex and Kent were in revolt.

This is How Revolts Start is an Event Quest in Monster Hunter World (MHW). Event quests are repeatable but can only be participated in during.
the seven commandments of animal farm

Talk dirty to me 1

2 thoughts on “The Revolt of the Angels by Anatole France”