Ernest and Celestine by Gabrielle Vincent

All of Gabrielle Vincents books about Ernest and Celestine are adorable. Celestine is a young mouse, and Ernest is an adult bear, and they are the best of friends. There isnt any backstory as to why Ernest is caring for Celestine as he would his own daughter, but it doesnt really matter why ... what matters is the tender love between the two of them. You get a real sense that Celestine is very young, very innocent, and very much in need of the warmth, strength, and wisdom that Ernest brings to her life.

Just look at the love in this gorgeous illustration.... 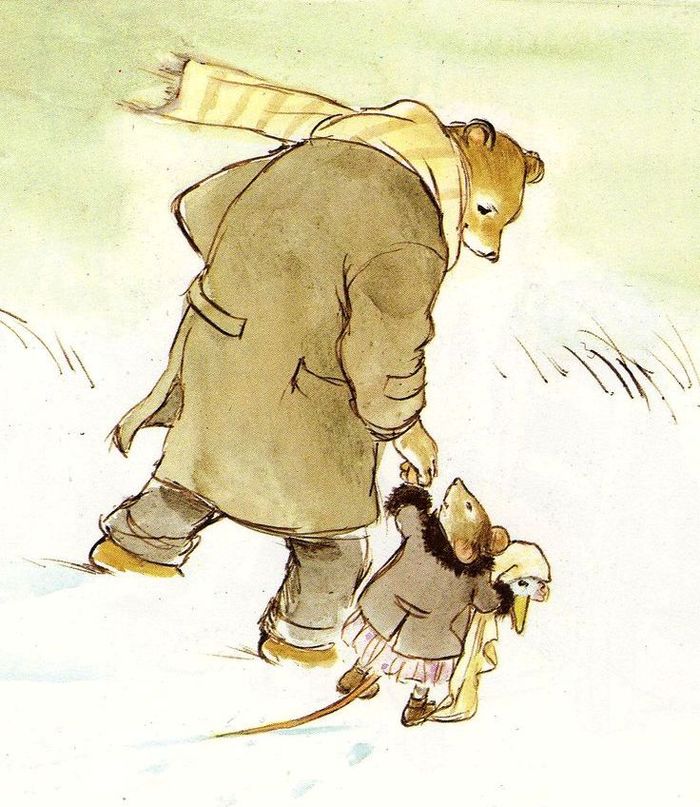 I found these books in a local library when my daughter was a small child, and we both fell in love with them. We read them together, over and over and over. The illustrations are as much a part of the story as the text. It is sheer joy to sit and contemplate the drawings, and every time you read the book you notice something new.

In this particular story Celestine loses her beloved doll named Gideon. To find out the rest of the story, youll have to read the book! :)

Another whimsical illustration from the book.... 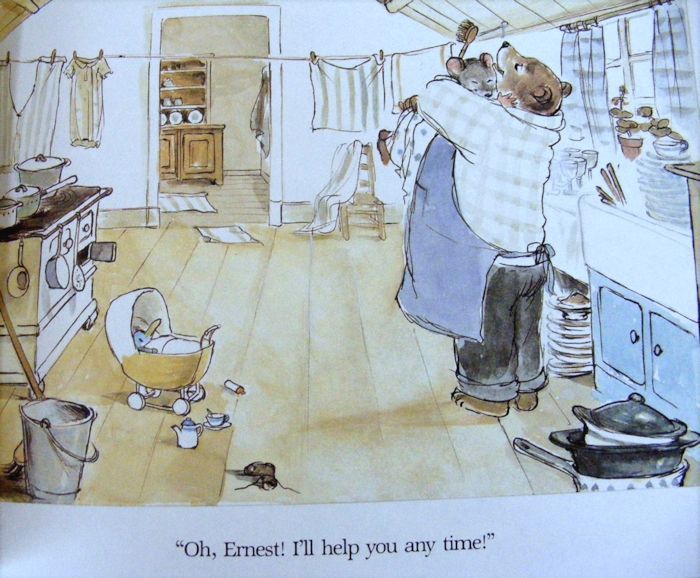 I highly recommend this book, and all of the Ernest and Celestine books.

Id like to add a couple of paragraphs from another review, as they very eloquently explain an aspect of these books that I forgot to mention above ... Ernest and Celestine are poor. When my daughter, and I, read these books together, we were poor, too. So, they spoke directly to our lives in a way that not many books would.

Anyway, here is the excerpt of the review, An unusual aspect of Vincent’s stories is that a consistent feature is Ernest and Celestine’s poverty, though this is by no means a central feature. It never feels as though Vincent is particularly drawing attention to the character’s struggles, though they are often a catalyst for events which shape how the stories progress. This aspect is handled with a subtlety and sincerity that is rare to see in children’s literature. In Bravo, Ernest and Celestine!, for instance, a leaking roof causes worry for Ernest, who has no money to pay for it (I especially love his response to Celestine – “no, I’m just thinking” – when she asks if he is upset. It’s absolutely the response a caring adult gives to a child enquiring about adult problems). The denouement of the story – once they have made money busking – also feels accurate to their financial situation, where instead of fixing the roof, they buy each other presents. It’s a tender gesture of people who aren’t used to having money: you treat yourself or each other because you aren’t sure when you’ll be able to do so again.

Other problems associated with caring for a child while being poor are also dealt with realistically and with an empathic eye. Decorations, costumes and presents have to be scrounged and made rather than bought in Merry Christmas!; while in Where Are You? what is otherwise a fairly familiar story of a child getting lost in public kicks off with Ernest going for a job interview at an art gallery, which he is turned down for as he will not be able to bring Celestine to work with him, and they have no other option but to leave her at home alone. Interestingly, the aforementioned distressing aspects of the books never arise directly from the two being poor, rather, for the child-proxy Celestine, it is just one of the aspects of their life together.
http://werewolf.co.nz/2013/08/classic...

By continuing to use this website, you agree to the use of cookies in order to offer you content and services that are tailored to your interests. In the conventional world of bears, it is not the done thing to become friends with a mouse. Nevertheless, Ernest, a big bear, who happens to also be a clown and musician, takes in Celestine, an orphan who has fled the underground world of rodents. These two solitary creatures help and comfort each other, thereby disrupting the established order. Gabrielle Vincent.

Want to watch for free? Join for a free month.

Deep below snowy, cobblestone streets, tucked away in networks of winding subterranean tunnels, lives a civilization of hardworking mice, terrified of the bears who live above ground. Unlike her fellow mice, Celestine is an Unlike her fellow mice, Celestine is an artist and a dreamer - and when she nearly ends up as breakfast for ursine troubadour Ernest, the two form an unlikely bond. But it isn't long before their friendship is put on trial by their respective bear-fearing and mice-eating communities. Please enable Javascript to use Kanopy!

How to draw a salt shaker

How to host a book club

Louise hay you can heal your life companion book

Words to melt his heart

I am going nowhere in life

Books about the mexican cartel

Sex message to my love

0 thoughts on “Ernest and Celestine by Gabrielle Vincent”